Find A Grave is a great resource for genealogists and family historians, but there is nothing like visiting a graveyard in person. I was only able to visit a few cemeteries while on my Maine vacation in September, but wandering around Growstown Cemetery in Brunswick was a highlight of the trip.

The cemetery is pretty well documented already. Many of the graves are recorded on Find A Grave with photos of headstones and a Growstown Cemetery page on Rootsweb has 31 pages of indexed transcriptions. At this point in my research, it was almost overwhelming to see so many familiar surnames from my maternal grandmother’s line: Melcher, Morse, Sylvester, and Hunt were the main ones, though I recognized Stanwood, Patten, and Andrews from my maternal grandfather’s family. I had been reading A Midwife’s Tale (Laura Thatcher Ulrich), about the diary of Martha Ballard and the insights it gave into life in Maine towns at the end of the 18th Century and the beginning of the 19th. While walking around the headstones and reading all the names, I got a strong feeling about how inter-connected everyone was at the time, like an image of a web or woven fabric.

My biggest find was after finding the monument for my 3rd great-grandparents, Capt. Benjamin Morse Melcher and Emeline Sylvester Morse. They raised two children in Brunswick: a daughter Emma and a son Burdus Redford Melcher. Burdus went on to graduate from Bowdoin College and embark on a career in education. He was a high school principal in York County, ME for about 15 years and wrote some educational texts. In 1886 or 1887, he, his wife Maggie Richards and two children moved to Cambridge, Massachusetts, reportedly at the instigation of his wife who disliked the cold Maine winters. Unfortunately, he did not live in Cambridge for long; he died November 1888 at age of 40 of peritonitis. His occupation was listed as insurance agent instead of teacher or principal.

He was buried in Hope Cemetery in Kennebunk, near the house where his wife grew up. His headstone is set off by itself. A few yards away, the Richards family headstones sit all in a row.

Contrast this with the memorial stone I found in Growstown: 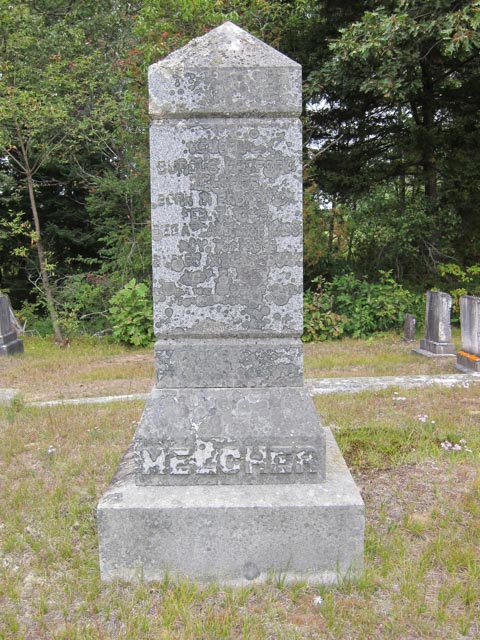 There is some deterioration of the carving, but in person, I could read that it was for Burdus, “born in Brunswick,” includes birth and death dates, marriage information and that he was buried in Kennebunk. His parents’ memorial is on the right side from his. His father died in 1894, and his mother in 1898, both at the age of 79.

After I had been there awhile, I looked up and saw the fog rolling in high above the trees. It was getting late and time to meet my cousins for dinner.

For more photos from my Maine trip, check out my Maine 2017 album on Flickr.

This site uses Akismet to reduce spam. Learn how your comment data is processed.