This week I signed up for a project called 52 Ancestors in 52 Weeks. The premise is simple: once a week choose an ancestor and write something about them. It doesn’t have to be a blog post, though that’s what I’ll be doing. It could be a tweet, a notebook entry, a page in a scrapbook, whatever you want.

My first ancestor will be: Lily Sawyer Pray 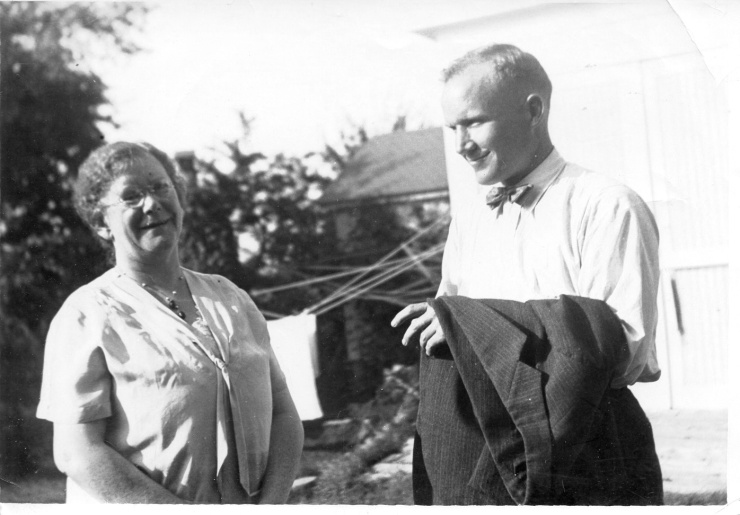 Aunt Lily (left) was the sister of my Great-grandmother Mary Ellis Pray and Aunt to my grandfather Donald Seward, pictured above on the right.

She was born in Bath, Maine in 1873 to James Wingate Pray and Georgianna Sawyer, and spent all of her life in the area until her death at age 63 in 1936. She never married or had children. After getting an undergraduate degree from Colby College, she tried teaching for a few years. She then went to work for the Bath Post Office, first as a clerk, then as a cashier, for over 32 years.

From the census records, it appears she lived in rented housing for most of her life. We do know that she owned a share of land near New Meadows River on which was built a small summer cottage. That land was passed on to her nephews after her death who then shared it with their own families for many years then passed it on to the next generation.

Lily belonged to the First Baptist Church and served as treasurer and occasional Sunday School teacher. She was also a member of the West Bath grange, a community organization. After her death, she was buried in Oak Grove Cemetery in Bath with her father, mother, and brother.

I chose Aunt Lily as my first ancestor because back in the 1930’s, my grandfather Donald sat down with her and asked her questions and took notes about family history. She remembered information back to her own grandmother’s time. Her grandmother lived from 1769 to 1869, so she was a connection back to the whole 19th Century.